There’s nothing new under the sun, as they say. Exercise has probably been around as long as the human race has been, albeit not in the systematized, efficient, psuedoscientific manner it exists in today. One no doubt has heard of the now legendary Milo of Croton, the Greek wrestler who “invented” progressive strength training sometime around 540 BC by carrying (or lifting, depending on the source) a calf everyday until it grew to maturity (and growing his muscles along with it). 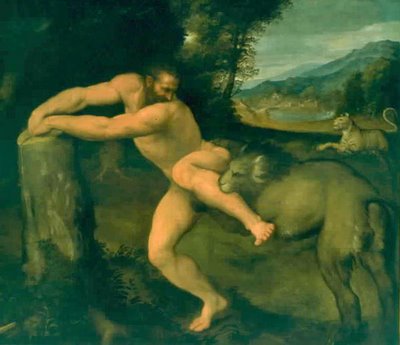 Above: That’s what you get for “demonstrating strength” instead of “building it.” Milo of Croton Attacked by Wild Beasts, oil on canvas, Giovanni Antonio de Sacchi, 1534-1536.

Exercise historian David Landau tells us that if there is one man directly responsible for the idea of a one-to-one physical instructor (in the modern age, at least), it would have to be Pehr Henrik Ling.

Ling is known for a great many accomplishments; he is cited as both “the father of physical therapy”, or more commonly, “the father of Swedish massage.” He was a member of the Swedish General Medical Association, a member of the Swedish Academy, and a professor and fencing-master at Lund University, where he completed his study of the medical cirriculum of the time, as well as extensive study in anatomy and physiology.

But for our purposes, we are concerned chiefly with his creation and implementation of his system, which he called “medical gymnastics.” Sounds quite all-encompassing, and it was: it is estimated that the entirety of the techniques of Swedish Massage (you know, that budding massage therapists go to the Swedish Institute for two years to learn and get certified in) comprise a whopping 10% of his system. The other 90% is comprised of military training (fencing and gymnastics), gymnastic exercises accepted as “cutting edge” techniques of the time, and a logical, progressive system of interpersonal exercise – or manual resistance exercises.

These obviously were trainers that truly earned their dollar. (Imagine applying manual resistance on every client, without the use of mechanical apparatus.)

Imagine, indeed (for all you trainers out there reading this).

It was Ling’s system, as taught in the Royal Gymnastic Central Institute (Ling’s government-sponsored school) that comprise the both the genesis of physical therapy practice and the notion of one-on-one individualized exercise instruction. Ling’s system dealt both in rehabilitation of acute and chronic conditions (Ling himself was said to be frail and weakly, suffering from rheumatism) and in improving the physical conditioning of the body, primarily through manual resistance techniques and weird toy-like apparatuses, like hoops, clubs, and balls.

Which underscores the idea that history does indeed repeat itself. Well, historically speaking, Zander came next, so at least I have that to look forward to.

Enjoy the Fourth, everyone.