Tonight in Brazilian Jiu Jitsu class, I had the distinction of working with a complete newbie – not only had this guy never done Jiu Jitsu before, he had never even set foot in a martial arts class ever (he was a former wrestler, however). Faced with the prospect of having a complete novice as my training partner, I did what any honorable Brazilian Jiu Jitsu player would have done.

I wiped the floor with him a bit (couldn’t resist – ha ha), then taught him all the basics I could in an hour.

I taught this guy my “Old Reliable” guard pass and my “Old Reliable” side mount escape. We drilled these two moves practically the entire length of class (outside of warmups and cool-downs). I’m pretty certain that, although he didn’t have them down perfectly, he was able to pick up the important details of each move. If he continues to drill these two moves in the same manner we did, and he adds a single submission (say, an armbar) to his repetoire, I am convinced he will submit 80% of the students in Renzo’s white belt class.

I can say that with confidence, not because I’m an awesome teacher, but because at white belt level, most BJJ players are consumed with the need to “beat” the other guy, rather than to excel at the game of Jiu Jitsu. They resort to using strength and power, rather than to get pulped refining their technique. As a result, one who cultivates their techniques can simply neutralize an opponent’s aggressiveness and strength and walk all over them. If that newbie can get those 2 techniques ingrained in his body, and add a good submission to his skill set, because his fundamentals are sound, he will be a force to be reckoned with.

Which brings me to the point of this post: fundamentals are important. Fundamentals are the base from which you potentially excel, or from which you potentially fall. Build a weak base, and the overlying structure, no matter how well designed, is destined to fall. Build a strong base, and the overlying structure will never be toppled.

This applies to one’s training and one’s nutrition within the context of a fitness program. One should endeavor to build a strong base (read: powerful legs and strong core) before working on other aspects of fitness and conditioning (speed, skills, etc.). Without a sound nutritional base, one’s body cannot be expected to deliver optimal results, whether that be fat loss, sports performance, or pain-free living.

There is a reason why the powerlifts (bench press, squat, and deadlift) are at the core of most training programs out there.

The top performers in all sports are those individuals who have so mastered the fundamentals of their chosen sport that they make things look easy. The mark of the true master is that he makes the fundamentals look so natural, it seems anybody could do them.

Enough talk. Let’s all go out and rework our fundamentals. That makes doing those fancy black belt Jiu Jitsu moves that much easier to pull off. 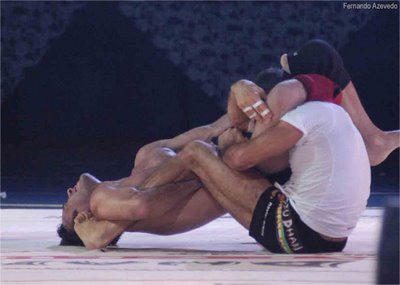 Above: Literally, a “black belt” move – the triangle choke that allowed Eddie Bravo to tap out Royler Gracie (earning Bravo a black belt and the respect of Jiu Jitsu practitioners everywhere) was a “fundamental” move in his game (although he did set it up from Rubber Guard – most certainly not a “fundamental” setup/flow).