24 hundredths of a second under your goal time – not bad for your first marathon! Hey, he did say he wanted to finish it in less than three hours…

It’s one thing to excel at your sport. It’s another thing to be top level in more than one sport. (or as in Jim Thorpe’s case, every sport).

Lance Armstrong’s marathon performance illustrates this point perfectly. There is probably no human being alive on Earth that has greater aerobic capacity than Lance, so if he’s so conditioned, why did he have so much trouble with the marathon?

Why did I put aerobic conditioning in quotes? Because people often tell me they want to “work on their cardio”, or that at least they “have good cardio.” Well, I’m not saying you can’t improve your general cardiovascular capacity. But the question is, “What for?” If one is looking for general health and well-being, well, just performing strength training and eating properly will do that; you don’t need to have super cardio for health purposes. If the reason is performance, then it depends on what it is that the person intends to do. I would condition a basketball player much differently than a soccer player – the “cardio” requirements of the two sports are completely different.

It’s called The Law of Specificity in sports science parlance. Essentially, if you run, then run. If you swim, then swim. If you run 100m sprints, don’t train for it by running 5 miles a day to “build up your cardio” and then “cross-train” by Rollerblading; get strong, do acceleration and starting drills, and most importantly, practice running 100m sprints (preferably faster and faster). Because conditioning is so specific, the idea of having a general “cardio” ability above a specific baseline level is incorrect. Otherwise, Lance Armstrong would not just be the world’s most dominant biker, he’d be the world’s most dominant runner, swimmer, skipper, and handstand walker as well (well, maybe not the last one).

Rarely, nature will produce a genetic wonder that can excel in multiple sports. They are few and far between, and they are rightfully legendary sports figures. Three names that immediately come to mind are: Jim Thorpe, Babe Didrikson, and Bo Jackson. These athletes managed to dominate more than one sport on a pro level because, somehow, their bodies are not limited the same way the rest of the human race (Lance, Michael, and Tiger included) is.

What was I talking about before? Oh yes – congrats to Lance. But – and I mean this with full respect, Mr. Armstrong – train a little harder next time. At least do some anterior tibalis work. 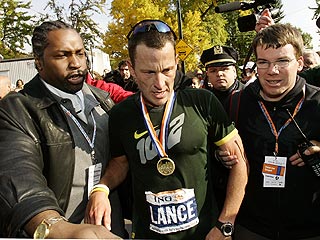 Above: This is what a man suffering from shin splints looks like. Photo by Tim Clary/Getty Images.