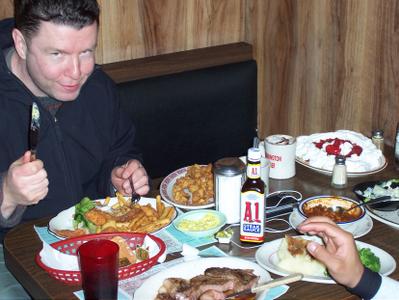 Above: “I think I eat pretty well. Besides, I’m going to do some cardio after this.” Good.

I got a lot of queries following the posting of Mike Chinchilla’s pictures regarding his exercise program and his diet. A lot of people were interested in seeing just what Chinchilla did to go “from flab to ripped” (as he would say). Well, the truth is always simple – he followed a very consistent and reasonably strict diet and exercise program. He strength trained four days a week and performed way too much cardio (30 minutes of moderately intense rope jumping 4 days a week), but we’ll forgive him for that. What I think contributed most to his success was his adherence to his dietary modifications.

Chinchilla’s diet for the 12 weeks was, for the most part (I will reconfirm it with him tomorrow):

That’s all. I’m guessing that he consumed in the range of about 2000 Cals per day, but to some extent, all that mattered was that he was eating frequent, small meals throughout the day, and that he completely eliminated foods that would destabilize his blood glucose level (especially simple sugars, including white flour, pastas, and starches).

If you’ve ever watched Chinchilla work out, you know that his form is not perfect. Nor does he perform ideal, or even near-ideal exercise, strength training or otherwise. But he did three things perfectly:

1) Consistency of exercise progression and application
2) Consistent application of reasonably sound diet
3) Monitoring of results week-to-week (through personal feedback, scale, tape measure, and body-fat measurement) to make sure his program was working

As mentioned, I personally think #2 was the most important factor that contributed to Chinchilla’s success. For the majority of trainees that I have observed, diet seems to be the aspect of weight reduction that gets the most questions. It is often less strictly monitored than exercise, and as a result, more liberties are taken with diet than should be allowed. Those “little slip-ups” add up to an inability to budge body fat.

Does one have to be perfect? Certainly not. But one must attempt to be as perfect as possible, as long as possible, if one desires the best possible results.

And I think that’s true for just about anything in life.