One of the trickiest things as a fitness professional is testimonials, and there is no better testimonial than comparision photography. After all, who can deny the effectiveness of a program or regimen after quite literally “seeing” the proof?

Well, a whole lot of people, actually. Because of the number of tricks that can be used to fake a comparison shot, most people don’t believe them or the results they document. In addition, small, day-to-day changes in one’s routine can have dramatic effects on one’s physique – a bad day can literally erase weeks of work (well, at least on film).

Case in point (and the reason I wrote this post in the first place), Mike Chinchilla just finished up his 12-week fat reduction program. He exercised like a man possessed, and was as strict as possible with his diet, short of deprivation. He didn’t cheat once during the entire 12 week duration of the program. I’d planned to take a final comparison shot of him on Saturday, June 25th, which was the last day of his program, but circumstances prevented us from meeting up that day. He’d planned to attend a barbecue the following day, and I warned him not to overly indulge as it would affect the quality of his “after” shot. He assured me he’d stay in control and we made plans to shoot that following Monday.

Which, as you may have surmised, was a mistake of epic proportions.

We took some shots on Monday, and we both were appalled; what the hell had happened? Monday’s shots looked worse, far worse than the shots we’d taken just 2 weeks prior at the 10-week mark. Much of his definition was gone, and worst of all, his 6-pack seemed to have disappeared completely. This was quite distressing to Chinchilla, as the abdomen was the primary area of desired improvement. He confided that he’d gone “a little bit overboard,” and consumed beef patties, burgers, pizza, pasta, beer, and ice cream in generous quantities during the course of the barbecue. While I couldn’t help but feel happy that he’d gotten his blueberry waffle fix on Sunday, my primary focus was in portraying his fat loss in the most positive light.

I told him to return to his normal (during the prior 12 weeks) way of eating, and to “exercise as you normally would, as if nothing had changed.” He agreed and we made plans to shoot photos again later in the week, on Thursday (3 days later).

The following is a shot from Monday. Not too bad, right? Definitely lean – but he is showing a bit of flabbyness about the midsection and some overall softness. 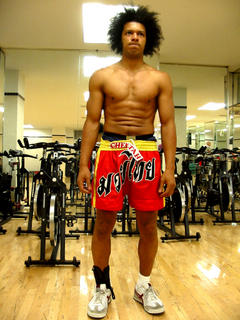 Contrast that with this shot from Thursday. Note in particular the appearance of the abs – not nearly as obsured as in the Monday shot, and overall, Chinchilla has a harder look to him. Not bad for a three-day changeover, eh? 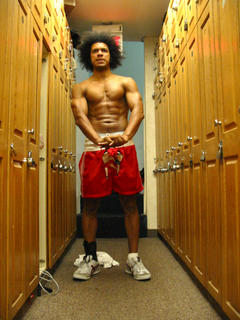